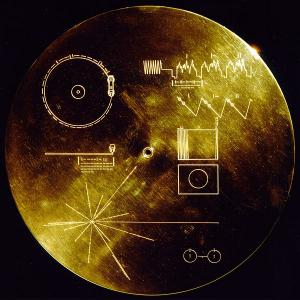 A few weeks ago, an old Radiolab episode reminded me of the Golden Record, which I hadn't thought about since childhood.

In 1977, Voyager 1 and 2 headed out into the universe, each carrying a copy of a Golden Record. A combination of greetings, audio clips, and images made up the Record's contents. The Records and the spacecraft carrying them are expected to remain intact for billions of years, hopefully to be discovered by alien beings. They are time capsules and, when I learned of them at eight years old, I loved the concept of a time capsule. What would I put in one? What would future people say when they found it? Could I find someone else's message from the past?

These time capsules sparked my first realization that the past was inhabited by actual people who felt real feelings and had real experiences, but whose lives remain largely (and frustratingly) mysterious. 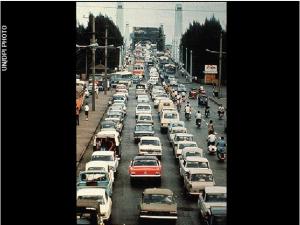 The greetings on the Record are disarmingly conversational. "Greetings from a computer programmer in the small university town of Ithaca on the planet Earth," it says in Swedish. "Hello? How are you?" in Japanese. Alongside images of human anatomy and mathematical statements are snapshots of mundane scenes, like this one of rush hour traffic in Thailand. Sounds range from whale song to train whistles, from the Brandenburg Concerto to Chuck Berry's Johnny Be Good. It's understandable given the intended audience, but as messages for posterity go, it's a far cry from Sima Qian'sShiji or Herodotus'History

Later in the podcast, astrophysicist Neil deGrasse Tyson reminds listeners of the enormous physical and chronological distances involved. The chance of any extraterrestrial being finding and playing the Golden Record is vanishingly small. And the likelihood that intelligent beings might hear it while human civilization still exists? Essentially zero. The Record is not the opening line in an interstellar conversation. Instead, for the incredibly unlikely extraterrestrial who finds and interprets it, the Golden Record will almost certainly be the sole artifact of human history.

Ruminating anew on the Golden Record, I've been thinking about how - when I was teaching - I could have used it as a frame for historical thought and discussion. The concept is broad enough to encompass all of World History but its actual contents are manageably discrete. Perhaps most useful, the Committee that spent a year deciding on the content of the Record also published a book, Murmurs of Earth, explaining why they chose what they did. It's as if Qin Shi Huangdi himself wrote an annotated inventory of his tomb.

In other words, there is ample material to play with the connections between artifacts, authorial intent, and historical interpretation.

Background on the Golden Record from NASA

Sound recordings from the Golden Record

Images from the Golden Record

"What is on Voyager's Golden Record?" from Smithsonian Magazine

What message do you believe the Voyager Interstellar Record Committee was trying to send about human civilization?

What similarities and differences do you see between the Golden Record and other intentionally long-lasting artifacts, like monumental buildings and stelae?

What message would you attempt to communicate about World History, if given the chance? Identify sounds and images you would include, and explain the reasoning behind your choices.

Short Activity: Attempt  to match images and sounds from the Golden Record to brief quotes about the committee's intent, from Murmurs of Earth