"From Gaza I travelled to the city of Abraham [Hebron], the mosque of which is of elegant, but substantial, construction, imposing and loft, and built of squared stones. . . It is said that Solomon commanded the jinn to build it. Inside it is the sacred cave containing the graves of Abraham, Isaac, and Jacob, opposite which are three graves, which are those of their wives."(Gibb, p. 55.)

In this chapter, you will learn a lot about Islam! Before you read about Ibn Battuta's trip, you may want some background about the important prophets that he will tell about. Do you know about Abraham? Have you heard about Adam and Eve and their sons Cain and Abel? Do you know about the Prophet Muhammad? These and others will be introduced in this chapter.

Ibn Battuta left Cairo and headed to Damascus, Syria along the Royal Road. The Mamluk government organized caravans to carry pilgrims and merchants along this trail. The Mamluks examined passports, taxed the merchants, and strictly monitored who was going in and out of their territory.

This part of the Mamluk Empire had been in fierce battles with Mongol Invaders. From 1260 to the early 1300s, the Mamluk warriors were able to push the Mongol armies out from Damascus and northern Syria, and kept them from taking Egypt and Palestine. The Mongols had taken over Baghdad and much of the Abbasid Empire by 1258 capturing and destroying cities as they went.

The Mamluk armies protected the empire and kept open the trade routes and the pilgrimage routes. Along one part of the route soldiers on horseback dragged carpet or mats to smooth the sand every night. The next morning the soldiers sought out anyone who had left tracks in the sand, pursued them and punished them severely.

Damascus was like a second capital to the Mamluk, a great city that Ibn Battuta just had to see! From Damascus he could connect with a Hajj caravan and complete his trip to Mecca in safety. But there were other holy sites to see on this part of his trip: Hebron, Jerusalem, Bethlehem, and more! And a stream of pilgrims came to these places under the protection of the Mamluk Sultan.

This is a map of the Mamluk Empire and the Mongol Khanates around the year 1294. If you compare this to the map of Ibn Battuta's journeys, you'll see that by the time Ibn Battuta embarked on his trip in 1325, the Mamluks had lost territory to the Mongols. Note the shifted border in the area of modern-day Iraq.

Source: The Islamic World to 1600 / The University of Calgary,1998. The Applied History Research Group. 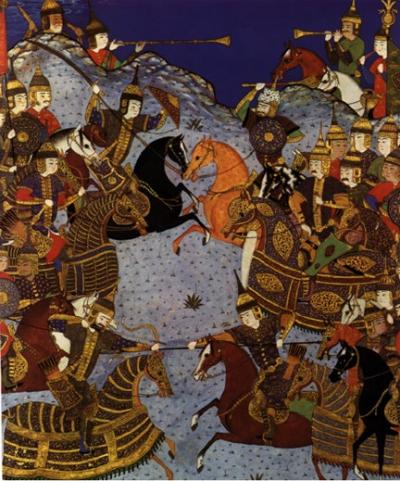 This Turkish miniature painting shows two armies in battle about the 15th century.

It is said that Muhammad himself visited this holy site (as well as Bethlehem) to pray on his Night Journey, making the sites even more holy and worthy of pilgrimage.

The Ibrahim Mosque in Hebron

"From Gaza I travelled to the city of Abraham [Hebron], the mosque of which is of elegant, but substantial, construction, imposing and loft, and built of squared stones. . . It is said that Solomon commanded the jinn to build it. Inside it is the sacred cave containing the graves of Abraham, Isaac, and Jacob, opposite which are three graves, which are those of their wives." [Gibb, p. 55.]

Then he arrived in Jerusalem which was a rather small town at that time, with a population of only about 10,000. "Its defensive walls were in ruins, part of its water supply had to be brought in... and it was located on none of the important trade routes..." [Dunn, p. 56.] Yet, because of its important shrines and sanctuaries, it was an important part of Ibn Battuta's pilgrimage: "God ennoble [Jerusalem] - third in excellence after the two sacred Mosques [of Mecca and Medina] and the place of ascension of the Apostle of God [Muhammed] - God bless him and give him peace - whence he was caught up into heaven."[Gibb, p. 77.] Here he visited the Sacred Al-Aqsa Mosque and the Dome of the Rock. The silver-domed Al-Aqsa Mosque was built in 691 across from the Dome of the Rock.

Ibn Battuta stayed in Jerusalem for about one week. Because the Hajj season would begin soon, he continued on to Damascus and arrived there during the Holy Month of Ramadan, 1326. From Damascus he could join a hajj caravan going to Mecca.

"This is one of the most marvelous of buildings, of the most perfect in architecture and strangest in shape ... it has a plentiful share of loveliness ... and rare beauty... The greater part of this decoration is surfaced with gold, so that it glows like a mass of light and flashes with the gleam of lightning... In the center of the Dome is the blessed Rock ...for the Prophet (God bless him and give him peace) ascended from it to heaven. It is a solid piece of rock, projecting about a man's height, and underneath it there is a cave... with steps leading down to it..." [Gibb, vol. I, p. 79.] 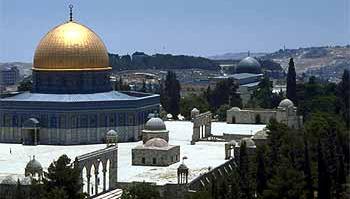 Dome of the Rock in Jerusalem

Dome of the Rock, interior

Damascus had once been the capital of the Umayyad Empire founded by Muawiya, the fourth caliph and a successor of Muhammad.

Ibn Battuta was very impressed with the beauty of Damascus:

"As for Damascus, she is the Paradise of the Orient...She hath adorned herself with flowers of sweet-scented herbs, and displayed herself in brocaded vestures from her gardens... Her soil is sated with abundant water ... and places cry to thee 'Stamp thy foot; here is a cool spring for thee to wash thyself and to drink'..." [Gibb, p. 118, quoting Abu'l-Hasan Ibn Jubair]

At the time Ibn Battuta visited Damascus, it was an international supermarket. Its population was about 100,000 people. Damascus was a center of trade routes which linked Egypt and Persia, and Asia Minor and the Black Sea region. And it was a center of learning.The Umayyad Mosque (or "Great Mosque") of Damascus, was built in the 8th century. It was famous as a center of learning throughout the Muslim world. Ibn Battuta describes it as "the greatest mosque on earth ..., the most perfect in architecture, and the most exquisite in beauty..."[Gibb, p. 124]. During his stay in the city, Ibn Battuta may have lived in this mosque's dormitory, sitting beneath the marble columns and listening to lecturers and Koranic readers.

"In this mosque also there are a great many students who never leave it, occupying themselves unremittingly in prayer and recitation of the Koran . . . The townsfolk supply their needs of food and clothing, although students never beg for anything of the kind from them."[Gibb, vol. I, p. 129]

Ibn Battuta would have studied like the students in the painting below. (It is a painting of a Muslim school built in Jerusalem in 1329 near the time of Ibn Battuta's stay.) Notice that the students sit around a wise or holy man and learn from him and read from the Koran held in a bookstand. At the end of their studies they can earn a certificate or credential so they, too, may teach or get a judgeship eventually. 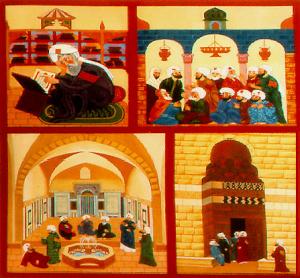 Other sites are described in his travels near Damascus, one being "the Cave of Blood, above which [can be seen] the blood of Abel, the son of Adam (on him be peace), God having caused a red trace of it to remain on the stones. This is the place in which his brother [Cain] killed him and dragged his body to the cave." [Gibb, vol. I, p. 145.]

Ibn Battuta stayed in Damascus for only 24 days, and he spent much of his time studying and meeting famous teachers and judges. But "he could not have devoted his every waking moment to his studies since he was by no means free of more mundane concerns. For one thing, his entire stay in Damascus took place during the month of Ramadan, when Muslims are required to fast during daylight hours, a strenuous obligation that upset the normal routines of daily life. He also admits in [his book] that he was down with fever during a good part of his stay and living as a house guest of one of ...[his] professors, who put him under a physician's care. On top of that, he found time ... to get married again."[Dunn, pp. 61 - 62.]Ibn Battuta claimed to have earned additional credentials for his studies in Damascus to help get him a job once he finally reached India.

Another wife, a divorce, and a son!

of course he tells of the important holy men, judges, or high officials he met. He almost neglects to tell the readers that here he married again, but divorced shortly afterward, and later we learn that he had fathered a son. (He learned about having a son after he had continued on, and later sent a present of money to him. Unfortunately, the son died at the age of ten and they could not meet.) Again, wives and now children will enter and exit his story without much explanation. A Muslim man can have as many as four wives at one time. It's hard to count how many wives (and concubines, or lovers) he had in his lifetime!