The Travels of Ibn Battuta

Welcome to this tour of Ibn Battuta's medieval travels!

You will be following in the footsteps of this famous 14th century Muslim traveler, exploring the places he visited and the people he encountered. To help you learn more about his adventures there will be images of the people and places he saw, information on the food he might have tasted, and "side trips" into the past and future.

Ibn Battuta started on his travels in 1325, when he was 20 years old. His main reason to travel was to go on a Hajj, or a Pilgrimage to Mecca, to fulfill the fifth pillar of Isla.. But his traveling went on for around 29 years and he covered about 75,000 miles visiting the equivalent of 44 modern countries which were then mostly under the governments of Muslim leaders of the World of Islam, or "Dar al-Islam".

He met many dangers and had numerous adventures along the way. He was attacked by bandits, almost drowned in a sinking ship, and nearly beheaded by a tyrant ruler. He also had a few marriages and lovers and fathered several children on his travels!

Near the end of Ibn Battuta's life, the Sultan of Morocco insisted that Ibn Battuta dictate the story of his travels to a scholar and today we can read translations of that account, which was originally titled Tuhfat al-anzar fi gharaaib al-amsar wa ajaaib al-asfar, or A Gift to Those Who Contemplate the Wonders of Cities and the Marvels of Traveling.

That title is a bit of a mouthful so the text is generally just called Ibn Battuta's Rihla, or Journey. 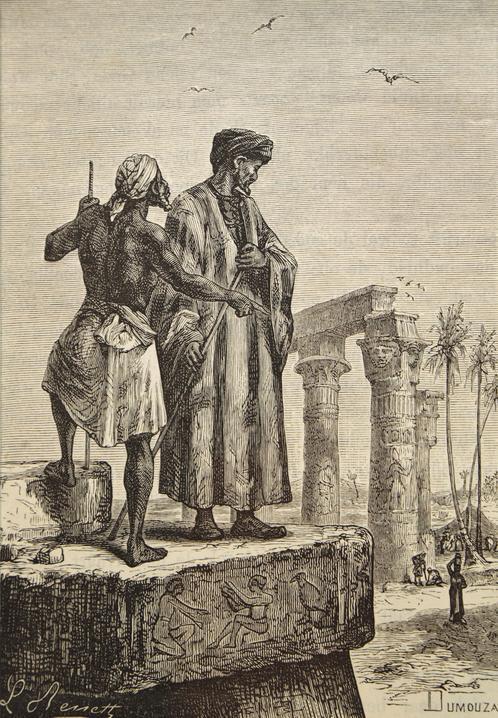 About this Virtual Tour

The Travels of Ibn Battuta: A Virtual Tour began as a Web resource written in 1999 by Nick Bartel for his students at Horace Mann Middle School, San Francisco, California. It was one of several large online resource units Nick constructed during the early days of curriculum on the internet. Most units were lost during technical changes over the years at San Francisco Unified School District, where the original pages were hosted. Since that time, online resources for teaching world history through traveler's narratives have increased dramatically, but Nick's pages are still some of the most valuable for classrooms. In 2012 he gave permission to ORIAS to rebuild and rehost the site at UCB, where it could be updated and "rescued" from the virtual void. The Center for Middle Eastern Studies provided funding to help in this process.

Special thanks go to Ross Dunn who worked with Nick on the initial project and whose wonderful book, The Adventures of Ibn Battuta, provided much of the content.

Thanks also to World Affairs Council, San Francisco Unified School District CIPD, and many students at Horace Mann for their help with the original pages!

Dar al-Islam in the 14th Century

The first map below shows the Muslim World (or Dar al-Islam) about 1300. The second map shows the route of Ibn Battuta's journeys. Ibn Battuta mainly traveled to places with Muslim governments in the areas inside the black border marking the Dar al-Islam. Beyond that, Muslim traders had already ventured out into China, Indonesia and further, and had established small Muslim communities in many regions of the world. Ibn Battuta would seldom be far from fellow Muslims on his travels, and he would greatly benefit from the charity and hospitality offered to Muslim travelers and pilgrims. 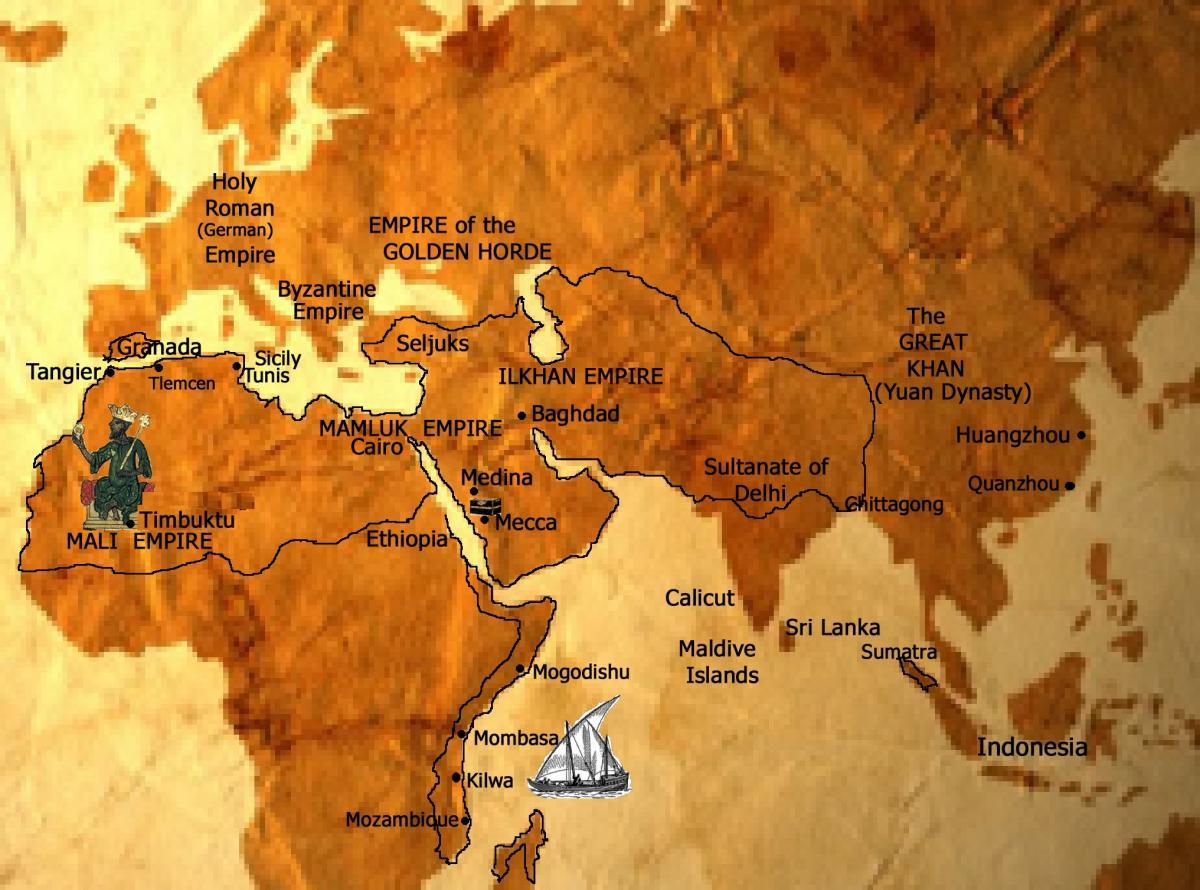 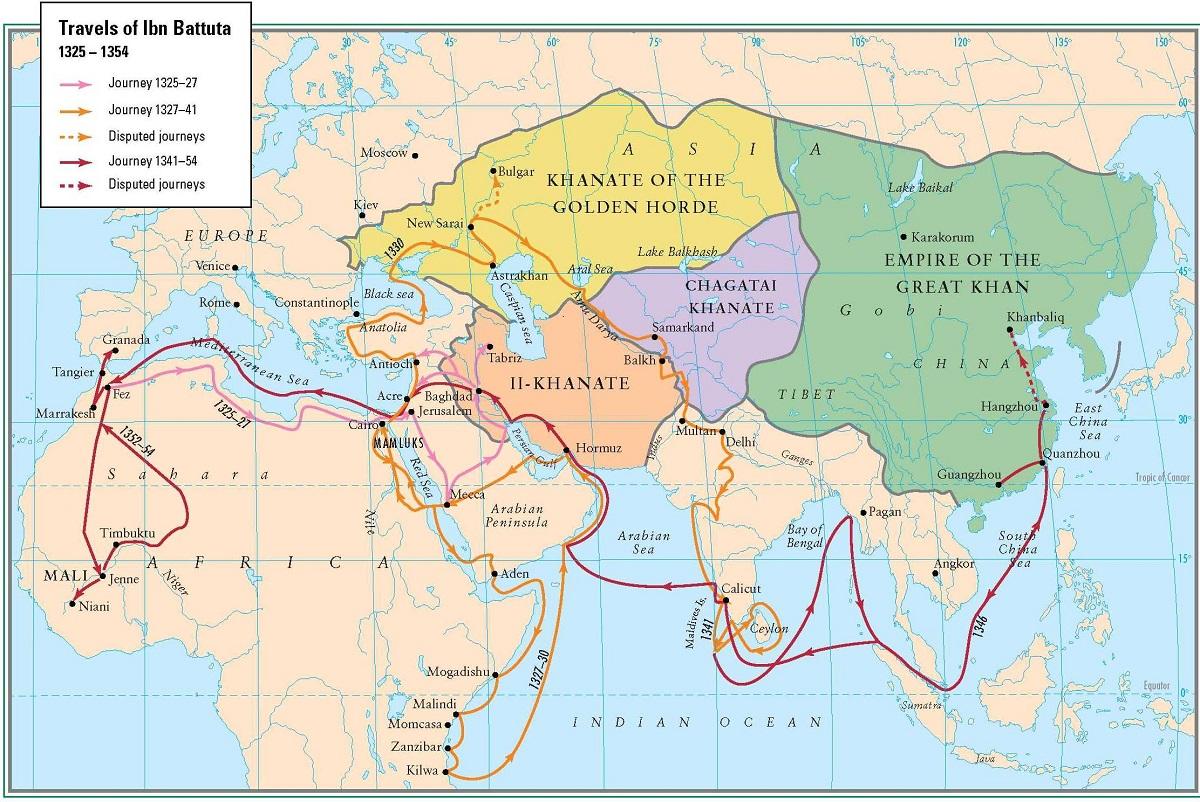