"Our stay at al-Madina ... lasted four days. We spent each night in the holy mosque, where everyone [engaged in pious exercises]; some, having formed circles in the court and lit a quantity of candles, and with book-rests in their midst [on which were placed volumes] of the Holy Koran were reciting from it; some were intoning hymns of praise to God; others were occupied in contemplation of the Immaculate Tomb (God increase it in sweetness); while on every side were singers chanting in eulogy of the Apostle of God. This is the custom by all during those blessed nights, and they also bestow large sums in alms upon the 'sojourners' [pilgrims] and the needy." [Gibb, p. 182.]

The Hajj caravan was probably several thousand people. Each person was responsible for his own animal to ride, supplies, and money for expenses. Because Ibn Battuta was still a poor and unemployed pilgrim, he welcomed support and whatever charity came his way. A law professor "hired camels for me and gave me traveling provisions, etc., and money in addition, saying to me, 'It will come in useful for anything of importance that you may be in need of' - may God reward." And so he finally began his hajj.

The distance from Damascus to Medina was about 820 miles, and the caravan normally covered it in 45 to 60 days. Even though the caravan was protected by the power of the Mamluk army, still there were real dangers.

According to Dunn: "Some pilgrims invariably perished along the way... from exposure, thirst, flash flood, epidemic, or even attack by local nomads, who seldom hesitated to disrupt the Sacred Journey for what it might bring them in plunder. In 1361, 100 Syrian pilgrims died of extreme winter cold; in 1430, 3000 Egyptians perished of heat and thirst." [Dunn, p. 67 referring to 'Ankawi.] 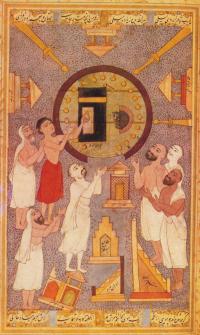 This image depicts a scene from an account of the life of the 8th century scholar and Sufi leader,Qasim ibn Muhammad ibn Abu Bakr, who lived in Medina.

Without any serious incidents, the caravan arrived at Medina, City of the Apostle of God - a little island of fertility in the desert. In 622 A.D. Muhammad and a small group of followers retreated from a hostile Mecca. His flight to Medina - the Hijira - would mark the beginning of the Muslim calendar. When the Prophet died in 632, his grave in Medina became a site of pilgrimage second only to the Kaaba itself.

The Mosque of the Prophet housed the sacred tomb of Muhammad as well as two of his successors, caliphs Abu Bakr and Umar, and that of his daughter Fatimah. Muslims were not required to visit Medina, but because of its closeness to Mecca there was a steady stream of pilgrims to Medina.

The caravan camped outside the city walls.

Ibn Battuta says: "Our stay at al-Madina ... lasted four days. We spent each night in the holy mosque, where everyone [engaged in pious exercises]; some, having formed circles in the court and lit a quantity of candles, and with book-rests in their midst [on which were placed volumes] of the Holy Koran were reciting from it; some were intoning hymns of praise to God; others were occupied in contemplation of the Immaculate Tomb (God increase it in sweetness); while on every side were singers chanting in eulogy of the Apostle of God. This is the custom by all during those blessed nights, and they also bestow large sums in alms upon the 'sojourners' [pilgrims] and the needy." [Gibb, p. 182.]

Then traveling for several more days and visiting more holy sites, they came close to Mecca.

"We set out again at night from this blessed valley [called Marr], with hearts full of gladness at reaching the goal of their hopes, rejoicing in their present condition and future state, and arrived in the morning at the City of Surety, Mecca (God Most High ennoble her)." [Gibb, p. 187.]

This is a picture of the interior of the burial place of the Prophet, in Medina.

This video presents the history of Mecca and the Kaaba, and explains Muslim religious practices. It is set to begin at 13:32, with the description of the Hajj.

The Main Rituals of the Hajj

Ibn Battuta performed the rituals within Mecca dressed in the simple white "ihram" cloth worn since he left Medina. First he went to the Kaaba, the holy shrine shaped like a huge cube ...

"like a bride who is displayed upon the bridal-chair of majesty, and walks with proud steps in the mantles of beauty... We made around it the seven-fold circuit of arrival and kissed the holy Stone; we performed a prayer of two bowings at the Maqam Ibrahim [a shrine which houses the footprints of Abraham] and clung to the curtains of the Ka'ba ... where prayer is answered; we drank the water of Zamzam...; then having run between al-Safa and al-Marwa, we took up our lodging there in a house near the Gate of Ibrahim." [Gibb, p. 188.]

Generations of rulers have made numerous changes to the Kaaba so that it looks different from the way Ibn Battuta saw it. The image to the left is a Persian miniature from c. 1432, about 100 years after Ibn Batutta visited the site. Today the Kaaba is fifty feet high, and its stone walls are draped with a fine black cloth with gold inscriptions from the Koran. At the eastern corner is the Black Stone, about 12 inches across set in a rim of silver. In Muslim tradition, Father Abraham built the Kaaba, originally of wood, to honor the One God. In pre-Islamic times the house came to hold over 360 idols and it was then the site of pagan rites. Muhammad restored it to a temple to the One God honored by Abraham.

Ibn Battuta then described the "Standing at Arafat" - an essential part of a Hajj. On the ninth day of the month of the Hajj, the Pilgrims went to the plain called Arafat twelve miles east of Mecca. Here they stood before the Mount of Mercy, where Adam prayed and where Muhammad gave his farewell sermon in 632. They recited prayers and listened to sermons until sunset. On the tenth morning there is a feast, and pilgrims pick up a handful of pebbles and cast seven of them at "the western pillar" at Mina, just as Abraham threw stones at the devil who suggested that Abraham didn't need to sacrifice his son as God commanded.

Ibn Battuta stayed in Mecca for three weeks making visits to other sites, meeting with holy men, and studied with them. Now Ibn Battuta had "graduated" to the status of "al-Hajji" - one who had been on the Hajj.

He had taken a year and a half to reach his destination of Mecca from his homeland of Morocco, and he would make three other trips to Mecca in his lifetime. But rather than return home, he thought about the adventures of travel, of getting a job as a scholar or judge. He had heard about the opportunities opening up to ambitious and learned men in the court of the Sultan of India... Perhaps that would be his destiny. But first, there was so much of the world to see. Where should he go next?