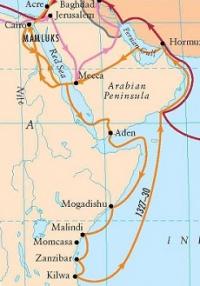 The Sultan of Kilwa was called 'the generous' "on account of the multitude of his gifts and acts of generosity. He used to engage frequently in expeditions to the land of the Zinj people [villagers of the interior], raiding them and taking booty [slaves and other wealth]... He is a man of great humility; he sits with poor brethren, eats with them, and greatly respects men of religion and noble descent." [Gibb, vol. II, pp. 380 - 381]

The Red Sea and East Africa

After Ibn Battuta had lived and studied in Mecca for about one year, he started another adventure. From Mecca, he went to Jidda on the Red Sea coast where he and other pilgrims were crammed onto a small ship. The image shown here is a dhow. Dhows were one of the earliest types of boats to sail the Indian Ocean. They were made from planks sewn together with no deck. The design proved so seaworthy that they are still used today. 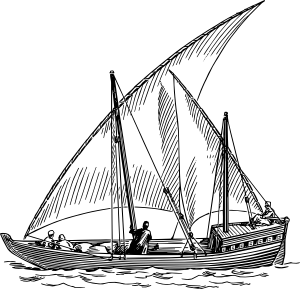 This was Ibn Battuta's first time at sea travel and he probably wasn't looking forward to it. The Red Sea was not easy to navigate with coral reefs and rocks just under the waterline. Storms were common, as were pirates who waited patiently for ships with rich travelers to rob and kill. Ships were weak in a storm - made of wooden planks that were stitched together with cords. Moreover, the winds could keep the sailboats from reaching their destinations. Truly the travelers' lives were in the hands of God.

"We traveled on this sea with a favoring wind for two days, but thereafter the wind changed and drove us off ... course... The waves of the sea entered in amongst us in the vessel, and the passengers fell grievously sick."

Eventually the ship had to head for shore, and fortunately Ibn Battuta and the other seasick passengers were able to rent camels and continue south on land.

Ibn Battuta was able to visit coastal cities as well as villages in the high mountains of Yemen. In Taiz which was high on a mountain slope, he stayed with the sultan (leader) and was given a horse. 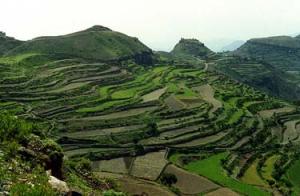 After a brief stay in Taiz, he continued down to the coastal city of Aden which guards the entrance to the Red Sea. Aden was a city built in the crater on an extinct volcano with the eastern side exposed to the sea. The harbor was surrounded by stone walls and sea gates for protection. Aden charged a tariff or tax on all the goods that came through this port. Ships brought spices, medicinal herbs, dyes to color cloth, iron, steel, Indian silks and cottons, pearls, cowrie shells (which were used for money in East Africa), Chinese pottery, African ivory, fruits and lumber.

In the time Ibn Battuta lived, Muslim traders had firm control over the western half of the Indian Ocean trading centers. It was like "a Muslim lake" around which Muslim merchants had started businesses and they depended on trade by ship. Muslim communities had developed along the coast of Africa and later would develop along the coasts of India and Southeast Asia. A place in the business community was open to any young man with brains and ambition - whatever his racial background - if he was a Muslim. This is the network that Ibn Battuta now traveled. But this part of the world was not so solidly Muslim - here it was a minority religion - and the language of the places he would visit would not be Arabic. But at each site there would be Muslims who would welcome him as a fellow Muslim, a pilgrim and a scholar. He was part of the international brotherhood of Islam. He would take advantage of Muslim hospitality and charity wherever he went.

From Aden, Ibn Battuta decided to have another adventure before settling down to a permanent job - down the coast of East Africa this time. The weather conditions were right for the trip, and it was easy to get on a dhow sailing south. A large dhow usually had a crew of thirty to hoist the sails and turn the sails into the wind. Smaller dhows were used along the coast with only one triangular sail. 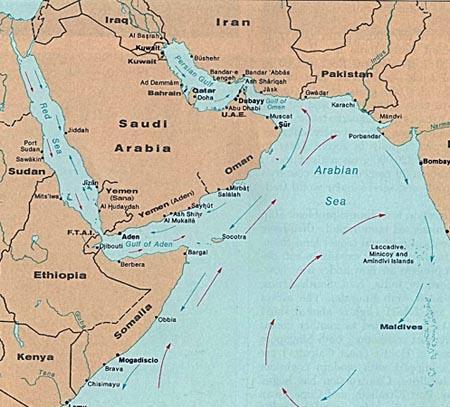 This map identifies dhow ports in the Indian Ocean. Indian Ocean trade was strongly influenced by a regional weather phenomenon called monsoons. Ships could travel during the winter months south with the monsoon winds. Then in the summer the winds reverse direction and ships could easily travel north.

Check out this video from Crash Course History to see how monsoon winds influenced trade in the Indian Ocean basin.

The trading ships made their way down the east coast of Africa stopping at towns to trade for African goods such as ivory, gold, myrrh to make a fine skin oil, animal skins, frankincense and ambergris used to make perfumes, and slaves. His first stop was Zeila, a port of the Christian kingdom of Ethiopia with a large Muslim community. He felt Zeila "the dirtiest, most disagreeable, and most stinking town in the world. The reason for its stink is the quantity of fish and the blood of the camels they butcher in its alleyways." To avoid the smell, Battuta spent the nights on his ship, even though the water was rough.

He continued southward and fifteen days later they reached Mogadishyu, the busiest and richest East African port. The Indian Ocean ports had long been active trading centers for Persian, Arabic, Indian and some European merchants. These merchants brought their languages, culture and religion to the region. For example, Ibn Battuta found that Mogadishu's sultan spoke both his native Somali and some Arabic and his chief legal advisor was Egyptian. But the East African trading ports were not isolated communities of foreign merchants. They were largely populated by black Africans speaking African languages like Somali in Mogadishu and Bantu further south). There was a great deal of intermarriage into the local families by the single Arab men who sought their fortunes along the coast of Africa. In some areas this coastal mingling of languages would finally develop into the language of Swahili which combines elements of Arabic, Bantu, and even some European languages.

Since Ibn Battuta was a real scholar of Islam religion and law now, he was made a welcomed guest of the local officials. This feasting and meeting of important people continued for about a week before the ship continued southward to Zanj and then Mombasa. They continued on to the islands of Pemba and Zanzibar, and finally arrived at Kilwa - today part of Tanzania.

Who were the people in the trading towns?

Settlers from Arabia and the Persian Gulf first introduced Islam into the little ports and fishing villages along the coast when they came to trade. The great majority of immigrants were males who married into local families. In Kilwa one family took control of the trading and gold markets from Zimbabwe. This family became very wealthy. They ate off Chinese porcelain, wore silk garments, and had indoor plumbing! Look at the ruins of the palace in which they lived.

Ibn Battuta tells us several times that he was given or purchased slaves.

Side Trip: Explore the many faces of slavery in Ibn Battuta's world.

He also tells us very briefly how slaves were taken and given as gifts.

The Sultan of Kilwa was called 'the generous' "on account of the multitude of his gifts and acts of generosity. He used to engage frequently in expeditions to the land of the Zinj people [villagers of the interior], raiding them and taking booty [slaves and other wealth]... He is a man of great humility; he sits with poor brethren, eats with them, and greatly respects men of religion and noble descent." [Gibb, vol. II, pp. 380 - 381]

Kilwa was important as a trading city for gold and its citizens enjoyed a high standard of living. The ruling class lived in stone houses up to three stories high with indoor plumbing. Most of the population lived in mud-walled houses with thatched roofs.

Ibn Battuta probably prayed in the Great Mosque of Kilwa which is now in ruins (below). Because Ibn Battuta's description of the East African coast is the only eye-witness account of the medieval period, it is studied in detail by historians. 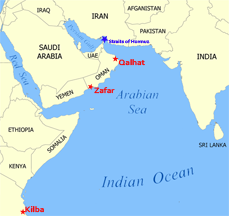 Ibn Battuta stayed in Kilwa about two weeks and with the changes in the monsoon winds, the ship changed direction and went north. A month later he was back in South Arabia. From here he decided on another short adventure - this time to take a small ship to the Gulf of Oman. Because he disliked the crew of his ship, Ibn Battuta and a friend decided to continue to Qalhat on foot. This decision almost cost them their lives! A guide that they hired plotted to kill them and take their clothes and valuables. Fortunately, Ibn Battuta was carrying a spear and was able to control the wouldbe robber and finally - after becoming sick and thirsty and walking with swollen, bloody feet - they arrived at Qalhat. Here they stayed with the governor for six days and recovered.

From Qalhat, Ibn Battuta probably continued to the Straits of Hormuz. In the bazaars he observed busy markets with merchandise from India and Persia, and along the coast he saw pearl fishing boats.

When people read Ibn Battuta's stories, he was accused of being a liar or teller of tales. For example, did he hear this account of pearl divers of the Persian Gulf  without actually seeing the process himself? Or was it a problem of translation?

"The diver ... puts over his face a covering made of the shell of the tortoise... and [something] like scissors which he fastens on his nose, then ties a rope around his waist and submerges. They differ in their endurance under water, some of them being able to stay under water for an hour or two hoursor less." ... "Inside [the oyster shells] are found pieces of fleshwhich are cut out with a knife, and when they come into contact with the air they solidify and turn into pearls (Gibb, vol. II, p. 408 - 409.)

Ibn Battuta was thinking about a return trip to Mecca - his third visit. Traveling mostly by land now, he reached Mecca in the winter of 1330. After tiring sea voyages, climbing high mountains in Yemen, traveling across the equator and through the hottest places on earth, and almost losing his life, he was looking forward to a long rest with his Koran and his law books. 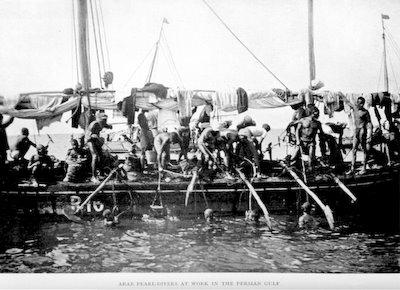