"The people fasted for three successive days... [Then all the people] assembled in the Great mosque until it was filled to overflowing... and spent the night there in prayers... Then, after performing the dawn prayer..., they all went out [barefoot] together... carrying Korans in their hands. The entire population of the city joined... The Jews went out with their book of the law and the Christians with the Gospel... [all] of them in tears . . . imploring the favor of God through His Books and His Prophets." [Gibb, p. 143-144]

The winter monsoons carried Ibn Battuta's sailing junk south from China. He returned to Samudra, on the island of Sumatra, where he stayed again with the sultan, this time for a few weeks. He continued on to Quilon, India and then up to Calicut. There he thought about returning to Muhammad Tughluq, his former employer in Delhi, and throwing himself on his mercy. But fear kept him from doing that.

A Glimpse into the Future of India

When Ibn Battuta returned to India, Muhammad Tughluq had gone out battling more rebels in the north. There he would die of illness in 1351, only a couple of years after Ibn Battuta passed through India on his way back home. The Delhi Sultanate was reduced to a small northern state while the south was a patchwork of small Muslim and Hindu kingdoms battling each other.

The sultanate became so weak that in 1398, a Mongol-descended group, under the leadership of Timur (Tamerlane), mercilessly sacked and plundered Delhi.

It wouldn't be until the early 16th century that a Muslim leader would unite most of southern and central India into the Mughal Empire (Persian for "Mongol Empire") .

The Mughal Dynasty was a line of Muslim emperors who reigned in India from 1526 to 1858. Babur, the first Mughal emperor, was a descendant of the Turkish conqueror Timur on his father's side and of the Mongol conqueror Genghis Khan on his mother's side. He invaded India from Afghanistan and founded the Mughal Empire on the ruin of the Delhi Sultanate. 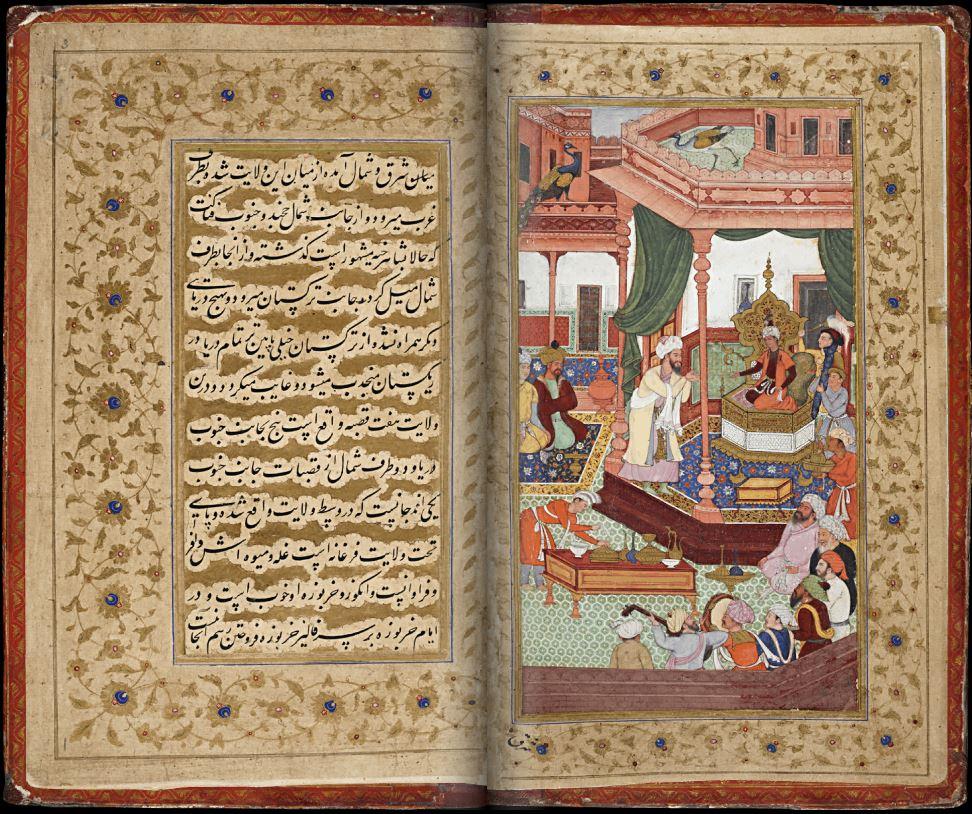 This illustrated account of Babur's life was comissioned by his grandson, Akbar. Click on the image to see the high-resolution online exhibition of the text, hosted by the British Library.

For more on the Mughals, check out this video from Crash Course World History. It explains the origins of the Dynasty and provides information about two well-known Mughal leaders: Akbar and Aurangzeb. Keep in mind - the Mughals rose to prominence about 175 years after Ibn Battuta visited the area.

Instead of staying in India, Ibn Battuta decided to go on another hajj to Mecca, and so he caught the monsoon winds going westward back across the Indian Ocean. He sailed for 28 days and arrived at Zafar on the southern coast of the Arabian peninsula. With changes in the wind of the early summer monsoons, he sailed north through the Persian Gulf. He arrived at Hormuz City and found that the elderly Arab ruler was at war with two of his nephews for control of that territory. These ports were important for trade and the war had caused much destruction and famine.

Ibn Battuta continued quickly through Persia. He was surprised that the once mighty Ilkhan Empire was falling apart. He had traveled with the powerful Sultan Abu Sa'id (the Il-khan) only eleven years before. But the sultan had died, poisoned by one his own wives! And then Mongol and Turkish generals challenged each other for control. The result was a patchwork of small military states at war with each other.

Ibn Battuta returned to Baghdad and from there crossed over the Syrian Desert on the camel route. At last he arrived in Damascus in the winter of 1348. There he heard from caravan traders that his father had died fifteen years before. He also learned that a son he had never met had died at the age of ten.

He next went to Aleppo for a few months as a tourist. Here he saw the citadel, an outstanding example of Arab military architecture. It stands atop a hill for defense and has massive stone walls. Aleppo was the northern capital of Syria. 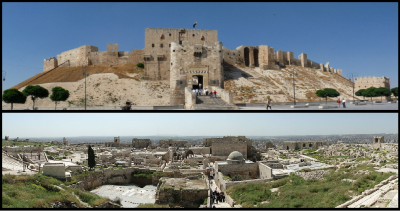 Two views of the Aleppo citadel: from the front, looking up and from the top, looking down.

Ibn Battuta's account is engaging in many ways, but one significant point of interest is the fact that his return trip coincided with the spread of the bubonic plague from Central Asia to the Mediterranean and into Europe and North Africa.

As Ibn Battuta rode through Syria, a terrible disease was descending upon his world. This was the Black Death (or bubonic plague). He first tried to out-run it, but each city he reached was in the middle of a terrible outbreak. In Damascus the death toll was 2,000 people a day! The business of the city had come to a halt. The people begged God for the plague to stop.

"The people fasted for three successive days... [Then all the people] assembled in the Great mosque until it was filled to overflowing... and spent the night there in prayers... Then, after performing the dawn prayer..., they all went out [barefoot] together... carrying Korans in their hands. The entire population of the city joined... The Jews went out with their book of the law and the Christians with the Gospel... [all] of them in tears . . . imploring the favor of God through His Books and His Prophets." [Gibb, p. 143-144]

The Black Death had started in the early 1330s, before Ibn Battuta reached China. It began in the grasslands of Central Asia and spread eastward in to China and westward across Asia to the Black Sea. The plague is found in rodents like ground squirrels and rats, but it is spread to humans through the bite of a flea living on infected rodents. Drought in Central Asia may have pushed infected rodents into closer contact with humans. Their infected fleas then found their way into the wagon trains and storerooms of caravanserai. The disease spread rapidly as people tried to escape along the trade routes of the steppe. The same Mongol empire that encouraged travelers like Ibn Battuta and Marco Polo, also quickened the progress of the plague across Eurasia between China and the distant Atlantic Coast.

Italian ships carried infected rats and fleas in their cargo to Constantinople, Venice, and Genoa. The plague reached Sicily and Egypt in 1347. One Egyptian historian tells of a ship: out of a total of 332 on board, only 45 arrived at the port of Cairo alive. All of those who had survived died soon after in the port. [Dols, The Black Death in the Middle East, p. 69]

From the sea ports, caravans transmitted the disease throughout Europe, northern Africa, and the Middle East. Estimates of the death tolls vary between 1/2 to 1/3 of the populations. At the other end of Eurasia in China the outbreaks of the plague caused massive death rates and economic chaos, and contributed to the collapse of the Mongol (Yuan) Dynasty.

A Note about the Black Death and "Plague" Images Online

Mistaken information travels quickly on the internet. A good example of this problem is images that are said to depict bubonic plague. The "Disease and Landscape in Medieval and Early Modern Europe" episode of The Ottoman History Podcast takes on several common examples of images that have been widely and erroneously used as images of bubonic plague. Begin listening at 32:30 for this discussion of mis-used imagery and see their website to get a look at the pictures in question. 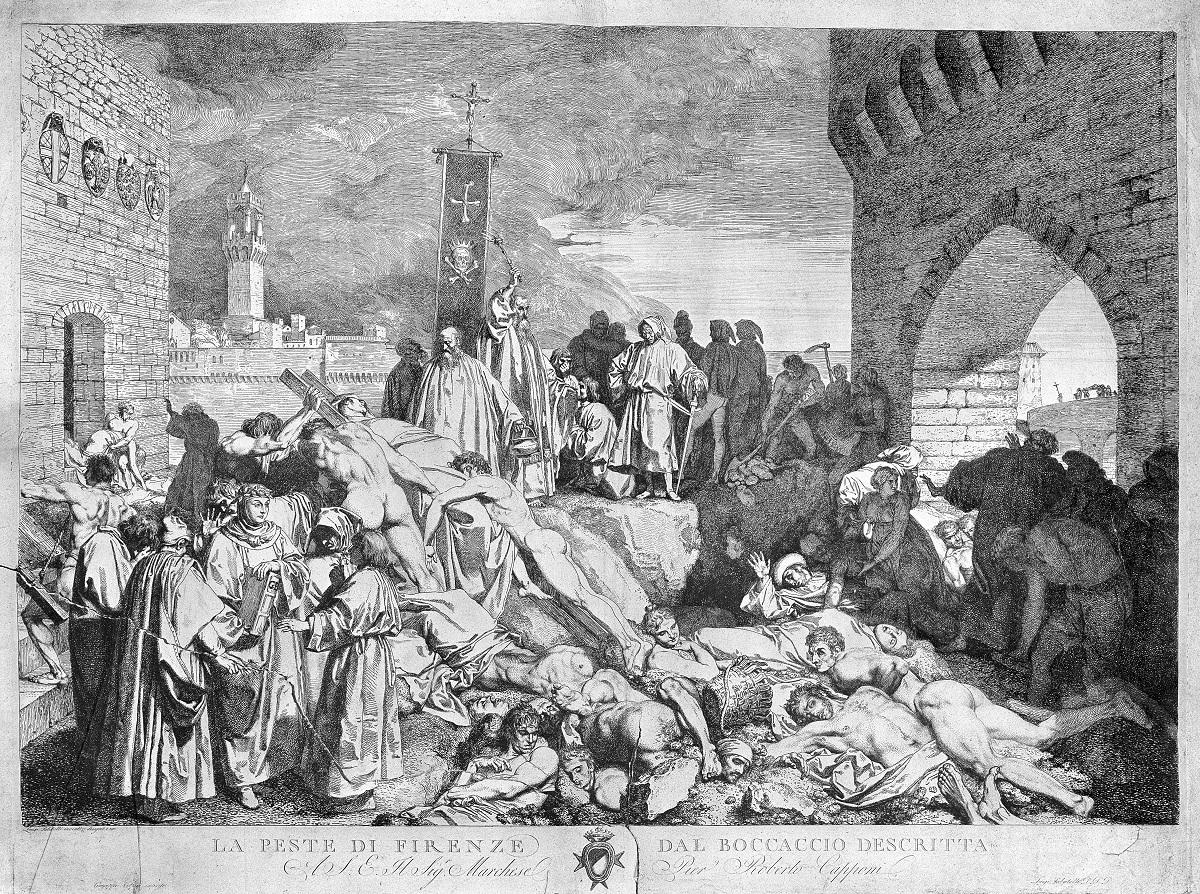 The plague of Florence in 1348, as described in Boccaccio's Decameron ('Il decameron'). Etching by L. Sabatelli

"Civilization both in the East and the West was visited by a destructive plague which devastated nations and caused populations to vanish. It swallowed up many of the good things of civilization and wiped them out... Civilization decreased with the decrease of mankind. Cities and building were laid waste, roads and way signs were obliterated, settlements and mansions became empty, dynasties and tribes grew weak. The entire inhabited world changed." [Ibn Khaldun, Persian historian]

As frightening as pandemic disease is in the modern world, people in Ibn Battuta's time had it even worse. As Dunn explains, "Muslims [in Ibn Battuta's time] were recommended to live in fresh air, sprinkle one's house with rose water and vinegar, sit as motionless as possible, and eat plenty of pickled onions and fresh fruit. Those who fell victim... were advised to have their blood drawn, apply egg yolk to the [skin], wear magical amulets, or have their sick bed strewn with fresh flowers. Above all, God's creatures were urged to spend their nights in the mosque and beg for divine mercy." [Dunn, p. 273]

On to Cairo and Mecca

Even with the threat of the Plague, Ibn Battuta continued on to Palestine and over to Cairo where the toll was still rising. (He tells us that the death toll will reach twenty-four thousand in a day in Cairo!) Then he went up the Nile where the plague had not yet started. Crossing the Red Sea he arrived at Jidda, and continued on to Mecca. He stayed in Mecca for more than four months. The plague raged in Mecca, too, brought by the caravans.

With death all around him, perhaps he felt the need to go home. He was 45 years old and had been gone for 24 years. He again headed west back toward Morocco. "I was moved [to go back] by memories of my homeland, affection for my family and dear friends, who drew me toward my land, which, in my opinion, was better than any other country."

He left Egypt on a small ship and went to Tunisia where he then traveled overland. He made a brief trip to the Christian lands of Sardinia, but he heard rumors that the people there were pirates who would hold him for ransom. So he left immediately.

After ten days at sea he arrived at Tenes. From there he went overland to Morocco. Here he learned that his mother had died only several months earlier. Had she heard from travelers that her long-departed son was on his way home? He arrived in his family's home of Tangier and visited his mother's grave. He met with friends and family and shared his tales of his travels to all parts of Dar al-Islam.

But restless again after only a few days, he decided to go to the nearby harbor city of Ceuta. He was already thinking about making another trip.