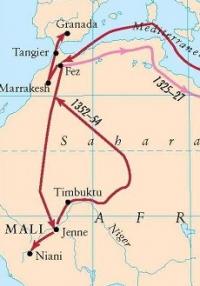 Ibn Battuta was commanded to "dictate an account of the cities which he had seen in his travel, and of the interesting events which had clung to his memory, and that he should speak of those whom he had met of the rulers of countries, of their distinguished men of learning, and of their pious saints." [From the introduction to The Rihla, transcribed by Ibn Juzayy, 1354.]

Working with Ibn Juzayy on The Rihla in Fez, Morocco

After Ibn Battuta returned to Fez in 1354, the Sultan of Morocco listened to his report on Mali. He also listened to Ibn Battuta's other adventures, and ordered him to stay in Fez. He wanted to have these stories written down for the amusement of his family and others. Travel writing, especially accounts of the Hajj, were a popular form of writing at the time. So Ibn Battuta was commanded to

"dictate an account of the cities which he had seen in his travel, and of the interesting events which had clung to his memory, and that he should speak of those whom he had met of the rulers of countries, of their distinguished men of learning, and of their pious saints." [From the introduction to The Rihla, transcribed by Ibn Juzayy, 1354.]

The Sultan hired a young writer - Ibn Juzayy - the young man Ibn Battuta had met in Granada three years earlier. Ibn Juzayy must have been excited about such a task! He had been fascinated by Ibn Battuta's stories earlier, and as a young writer, this job was one that could earn him respect. He was to put the stories into the proper form of a travel book, called a "rihla." Rihla means "voyage" in Arabic and it was a genre (type) of Arab literature that combined a description of travel (travelogue) with commentary on the people and practices of Islam throughout the Muslim world. Ibn Juzayy's account of Ibn Battuta's trip follows typical conventions for the genre, including sometimes borrowing descriptive language about various locations from similar, earlier travel accounts.

And so began the retelling of his adventures that had begun twenty-nine years before. Ibn Battuta wove his observations and hearsay, history and odds and ends into his story. Ibn Juzayy added poetry here and there, but generally he kept to Ibn Battuta's telling. To fill in gaps in Ibn Battuta's descriptions, Ibn Juzayy borrowed descriptions of Mecca, Medina and Damascus from a twelfth century traveler named Ibn Jubayr, and perhaps descriptions of other places from other travelers, too. This makes it hard to know exactly which parts of the account actually reflect Ibn Battuta's personal experiences, but it was common practice at the time. His book, like many travel accounts, melded his own experience with that of earlier travelers and his own experiences with hearsay from people he met on the road.

Maybe Ibn Battuta exaggerated his own importance to people he met. After all, he was just a traveler with little formal education. In telling the story, perhaps he couldn't get all the details in order and perhaps his memory failed him on some details. One famous biographer of the time had met Ibn Battuta in Granada and said that he was, "purely and simply a liar." But Ibn Battuta had his supporters, too. One advisor to the Sultan in al-Andalus said, "Be careful not to reject such information about the condition of dynasties, because you have not seen such things yourself." And another scholar in Tunisia said, "I know of no person who has journeyed through so many lands as [he did] on his travels, and he was withal generous and welldoing." [Dunn, p. 316.]

When it was finished, The Rihla had little impact upon the Muslim world. However, it was copied by hand and the whole book or shortened versions could be found in some libraries, or carried around by travelers who followed on parts of his trips. It was not until the 19th century that European scholars found some of the Arabic books and translated them into French, German, and then English. Once it was translated the book began to receive the widespread attention it deserves as a record of history.

This is an important sidenote: historical research depends on multi-lingual people who can read texts in one language and translate them into others, thus making information from the past available to wider audiences. Consider all the documents you have ever read from early English history, Greek or Roman history, Chinese or Indian or Aztec history, etc. Every time you encounter an English version of a text in a book or on the internet, it is the result of a diligent multi-lingual scholar who translated it from its original language (possibly an ancient, dead language) into English.

And what happened to Ibn Battuta after he told his story in the palace of the Sultan? He probably got a job as a qadi (judge), but we don't know where. Little is known about this period of his life. Perhaps he married again and fathered more children. Perhaps he entertained scholars and students with his stories, as he had entertained kings, commoners, and holy men on three continents.

Ibn Battuta died in 1368 or 1369. Tour guides in Tangier take tourists to see an unmarked grave that they claim to be his, but no one can confirm it as his final resting place. 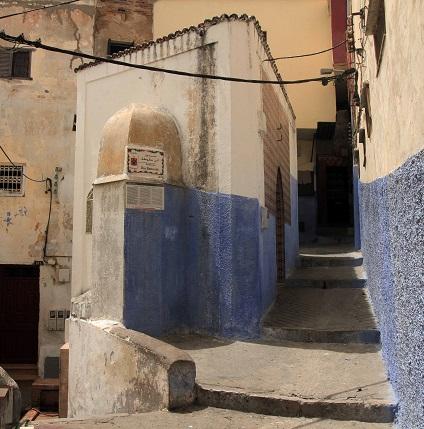 This building, in Tangiers, may be Ibn Battuta's tomb.  The photograph comes from the blog of a modern traveller - the current version of the type of rihla that Ibn Battuta produced in the 14th century. 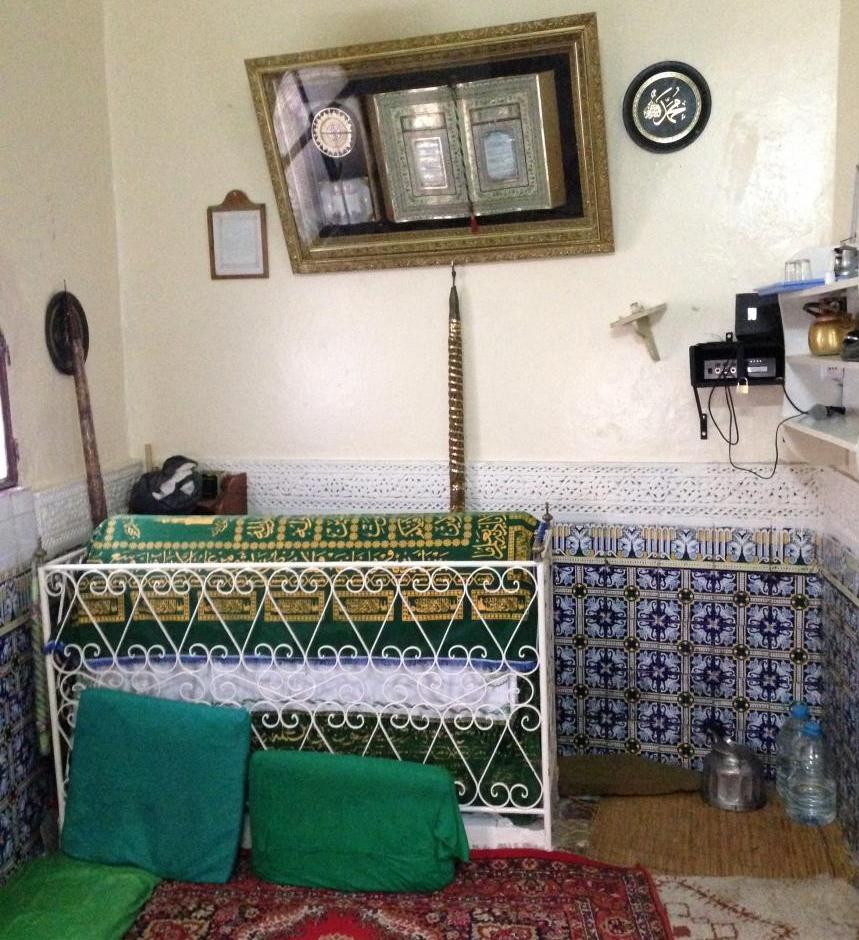 This image of the inside of Ibn Battuta's tomb, comes from a different traveller's blog. This person decided to make a trip specifically in the footsteps of Ibn Battuta. Click on the image to read about his experiences.

Today Ibn Battuta is somewhat famous. A crater on the moon is named after him, as is an Internet online matchmaking service for Arab singles! As you see from the image above on the right, his journey has inspired modern people to travel and see the world. Perhaps most appropriately, the airport of Tangier was named for Ibn Battuta  - carrying young Moroccan travelers as they begin their own adventures. 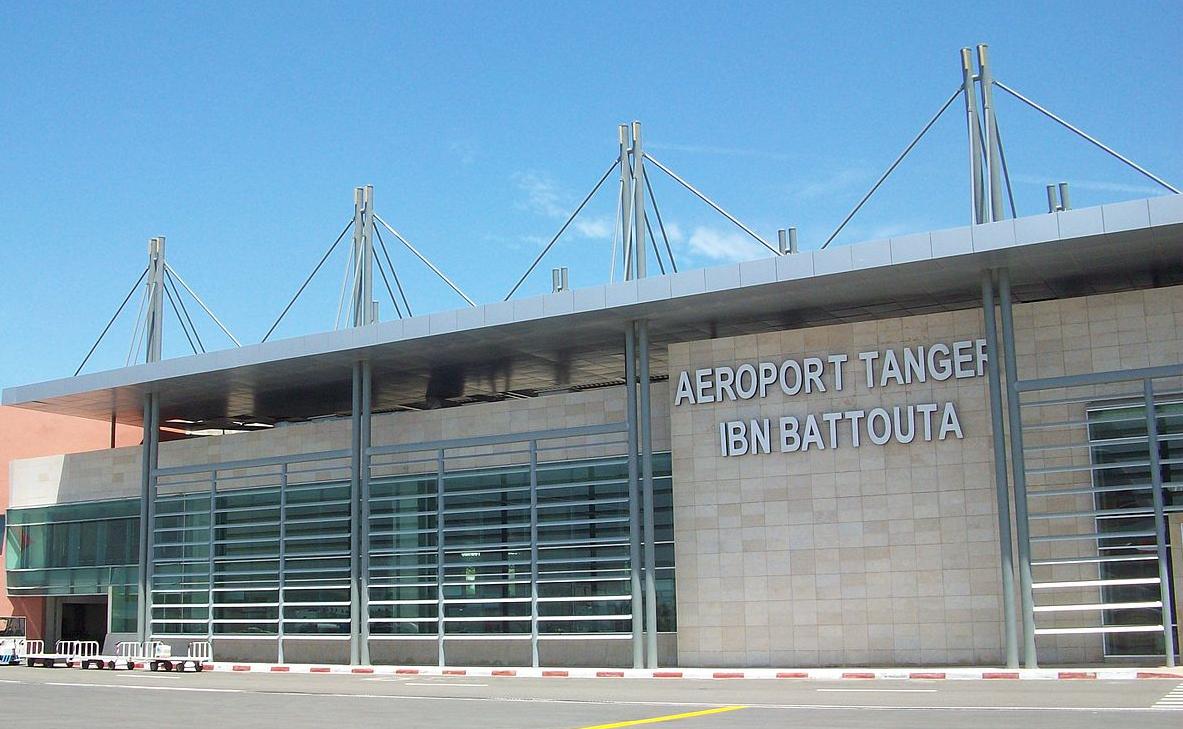