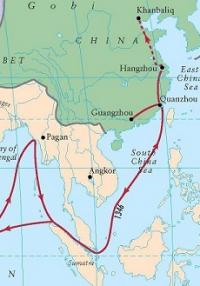 "China was beautiful, but it did not please me. On the contrary, I was greatly troubled thinking about the way paganism dominated this country. Whenever I went out of my lodging, I saw many blameworthy things. That disturbed me so much that I stayed indoors most of the time and only went out when necessary. During my stay in China, whenever I saw any Muslims I always felt as though I were meeting my own family and close kinsmen." [Dunn, p. 258]

Eastward to Malaysia and Sumatra

After a series of failures in the Maldive Islands and in India - having lost everything he owned to pirates and shipwrecks - Ibn Battuta resolved to go to China on his own.

Muslim travelers, such as Ibn Battuta, knew that they could find Muslim hospitality in the major sea ports. The Prophet Muhammad had even encouraged travel and learning in China in a saying: "Seek knowledge, even as far as China." So traveling to China, like elsewhere Ibn Battuta had traveled, would not be difficult. He could depend on the charity of fellow-Muslims in Malaysian ports on his way to China, as he had in every other part of the world he traveled.

Malay rulers encouraged Muslim traders to settle in their ports and bring the advantages of a strong trading economy. Once established, the Muslim neighborhoods needed judges, scribes (people who could write), teachers, religious leaders, and businessmen. And so, the trading neighborhoods became larger and more influential. The Malay rulers recognized the advantages of becoming Muslims themselves, and many of them converted. As Muslim rulers, they could enter into the larger networks of trade and participate  more fully in the Dar al-Islam. Outside the coastal trading centers, Islam would later develop, too. This process was just beginning as Ibn Battuta came through. A Malay prince, ruler of Samudra on the coast of Sumatra, had converted to Islam in the late 13th century. Some of his non-Muslim subjects may well have been the pirates that plagued the merchant ships in the Strait of Malacca.

From India, Ibn Battuta and some traveling companions sailed to Chittagong, now the chief port of Bangladesh, a Muslim country next to India. He tells us that Chittagong was a city filled with food, but smelled bad - "a hell crammed with good things." Everything there was cheap, including slaves. He bought "an extremely beautiful" slave girl and a friend bought a young boy slave for a couple of gold dinar.

He went up the Meghna River to Sylhet in order to find a famous holy man who could perform miracles and foretell the future. (He supposedly lived to the age of 150!) According to Ibn Battuta, one day the old holy man told his surprised disciples that a traveler from North Africa was about to arrive and to go out to meet him. The disciples went out and discovered Ibn Battuta was on his way - two days away! Ibn Battuta stayed there for three days and shared the stories of his travels with the holy man. Then he continued on.

Back in Chittagong he caught a Chinese junk and went to Samudra on the island of Sumatra. This really was the end of Dar al-Islam for no territory east of this was ruled by a Muslim ruler. Here he stayed for about two weeks in the wooden walled town as a guest of the sultan. The sultan then provided him with supplies and sent Ibn Battuta on one of his own junks to China.

The rulers of all China were the powerful descendants of Genghis Khan and Mongol-ruled China was one of the Mongol khanates that dominated much of Asia during Ibn Battuta's lifetime. In China, the Mongol dynasty was called the Yuan Dynasty (1260 - 1368).

Muslims were welcomed into Yuan China and foreigners were recruited by the emperor. Muslims, and even a few Europeans like Marco Polo, held jobs in China such as tax-collectors, architects, and finance officers. The Mongol Dynasty had "an open door" policy that encouraged trade. So Muslim merchants were welcomed into southern Chinese cities, especially Quanzhou (Ch'uan-zhou) and Guangzhou (Canton) on the southern coast. They generally lived in their own neighborhoods where they built mosques, hospitals, bazaars, and conducted trade by ship that reached all the way back to the Persian Gulf, Red Sea, and Indian Ocean ports.

For about 40 days Ibn Battuta sailed. He is vague about stopping in two places. But at last he arrived in the busy sea port of  Quanzhou on the coast of Fujian Province.

He admired much that he saw. He observed that "silk is used for clothing even by poor monks and beggars" and that the porcelain was "the finest of all makes of pottery." Even the poultry amazed him: "The hens ... in China are ... bigger than geese in our country."

But he seems to have been in culture shock - discomfort at being in a culture he didn't understand or appreciate.

"China was beautiful, but it did not please me. On the contrary, I was greatly troubled thinking about the way paganism dominated this country. Whenever I went out of my lodging, I saw many blameworthy things. That disturbed me so much that I stayed indoors most of the time and only went out when necessary. During my stay in China, whenever I saw any Muslims I always felt as though I were meeting my own family and close kinsmen." [Dunn, p. 258]

China was not a Muslim country and the cultural differences he encountered offended him.

"The Chinese themselves are infidels who worship idols and burn their dead like the Hindus . . . eat the flesh of swine and dogs, and sell it in their markets."

Ibn Battuta had arrived in the last peaceful years before the collapse of the Mongol (Yuan dynasty) rule. He noted,

"China is the safest and most agreeable country in the world for the traveler. You can travel all alone across the land for nine months without fear, even if you are carrying much wealth."

Ibn Battuta describes a trip on the Grand Canal to Beijing, capital of Mongol China. But his description is so vague that most historians believe that he didn't really make the trip. (His book about his travels was more of a "travelogue" of the Islamic World, so perhaps he or the person who wrote down his stories exaggerated by filling in with hearsay and stories reported by other people. This was not an uncommon practice among traveller-writers at the time.)

Ibn Battuta reported meeting a rich Muslim trader who lived in Hangzhou which may have been the largest city in the world during the 14th century. He tells of staying with the Egyptian Muslim for a few weeks as he enjoyed banquets, canal rides, and magic shows. In Fuzhou he met someone whom he met when he passed through India. Now this man was rich. He "owned about fifty white slaves and as many slave-girls, and presented me with two of each, along with many other gifts."

When Ibn Battuta got back to Quanzhou he found a junk belonging to the Sultan of Samudra ready to go back. So he got on board and began his return home. In three years he would be walking the streets of his hometown Tangier, Morocco and describing his adventures throughout the Dar al-Islam (and beyond).

This short story about Quanzhou's cultural history describes the multicultural population of Quanzhou during the Song and Yuan Dynasties - when Ibn Battuta visited the city. It also helps contextualize Ibn Battuta's trip to the city as part of a the much larger movement of people and goods that made up the maritime Silk Road.